Wednesday 27th July saw the return of the Nantwich Show after a three year absence. With a new location, a new committee and no longer partnering the International Cheese Awards, the show was always going to have a different look and feel to it and we didn’t know quite what to expect. We need not have worried – the event was a huge success!

We went to the show to do what we do best – host a welcoming and fun stand with a competition that adults and children alike could get stuck in to, and provide hospitality for our clients, professional friends, or anyone who would like to have a chat with a member of our team.

Pat the cow made her first appearance after being under cover since the rained off show in 2019. We asked people to guess how many balls Pat was looking after in the ‘diary’. The answer was 580 and we’ll be in touch with the competition winners shortly.

Also making its first appearance at a show was the Firm’s new branding which looked resplendent in the sunshine. The Firm went through a full rebrand which was launched in January of this year. This was the first full outing for the new flags, banners, clothing and signage and many people complimented the new look.

However, the biggest compliment was being awarded 2nd place in the Professional Stand class. The judges commented on our clear ties to the rural community and our welcoming hospitality.

As Sponsors of the Coloured Rylands Category in the Sheep section, Head of Agriculture and Rural Affair Mike Bracegirdle has the pleasure of awarding the prizes to the winners of their categories. Well done to the Champions and Reserve Champions.

A big thanks must go to the Rachael and the team at Country Kitchen for keeping our guests glasses replenished and serving the most delicious cakes, biscuits and afternoon tea.

Thank you also to Alextra Wealth Management and Alextra Mortgages for joining us on our stand.

Our next rural show will be the Cheshire Ploughing Match on Wednesday 28th September where we will be sharing a stand with Mellor Speakman. 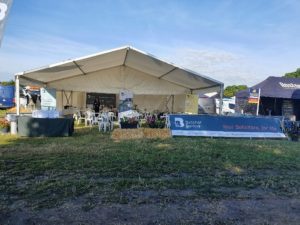